Once again we were called to bake a smile with Icing Smiles. The request came in late October for Becca’s sweet 16 cake. Her mother writes:

“I have been trying to come up with a theme for weeks now on a cake for Becca. There are a lot of things she likes. Music is HUGE in her life, she loves Big Band music, Patsy Cline, Dixie Chicks and Warren Zevon, not to mention Sesame Street baby stuff thrown in there. She also loves to watch YouTube on the computer, these are the two things she primarily does, youtube and listens to music. I’d say the color scheme would be pink tie dyed”

With such a huge range of things to work with, I had my work cut out for me. I decided the most perfect thing would be a pink tie-dyed computer with YouTube on the screen. It’s not often that I start my cake design with computer editing.  I took all of her favorite artists and incorporated them into Becca’s very own YouTube page. The computer screen and the baby sesame street characters are all printed on an edible sugar paper with edible ink. I also added some Post-it style notes out of fondant that Becca’s mother and sister wrote little notes on with edible ink. 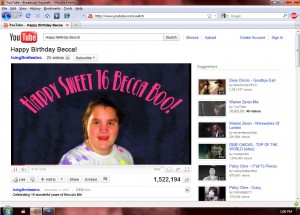 This was, by far, the best delivery I have had to date. The original party had to be postponed due to some medical difficulties. So, when the party was rescheduled, Becca’s family didn’t have a lot of time to prepare. I came to drop off the cake and was welcomed into their home with open arms. I saw the pre-party chaos and jumped in to help with the party preparation. I arranged some flowers, tied some bows, cut some veggies and gave hugs all around. Smiles were abundant!